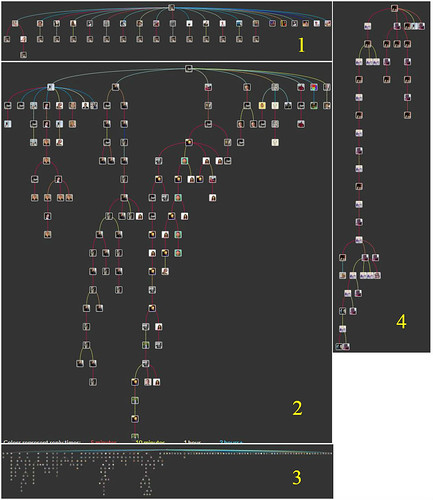 Using the Treeverse application I mentioned in the last post, I’ve now gone back through my field notes to some of the exchanges I came across during my participant observation. Some were brief and some were longer, but Treeverse provided a rather different perspective, and in several cases brought in some tweets that DataMiner hadn’t captured. In addition to being able to get a better sense of how the exchanges unfolded with time and being able to quickly swap between different threads, the tree view provides an immediate snapshot which is informative in itself.

The opening image is a montage of four exchanges which I’ve numbered accordingly. Each exchange begins with a single tweet which in some cases might be asking a direct question, whilst in others might have been a provocative statement.

Exchange 1 is a rather horizontal exchange where a question has been asked and a number of people provide replies, but there’s no follow up to those replies (other than the original tweeter thanking each person for responding).

By contrast exchange 4 has a much more vertical topology indicating a much narrower range of responses, but that a deeper dialogue opened where people were responding multiple times to produce a threaded discussion.

In exchange 3, there’s a combination of both 1 and 4. The shoutout attracted a large number of responses, hence the reason for the image being scaled down simply to fit in the montage. Over to the right are the lone responses, whereas over to the left are responses which initiated further questions or responses themselves.

Finally, the tweet in exchange 2 proved to be a rather provocative statement which set off a mini twitterstorm in which some were keen to challenge the statement, whereas others were equally passionate about supporting it. As a consequence, the tweet spurred a number of people to respond, which generated width in the tree, but also an extended discussion in which people repeatedly challenged each other and generated depth.

Less easy to see unless you click through to the original image, is the colour of the ties between the nodes. Red indicates responses which quickly followed one another; blue ties come from responses which were over three hours later. Possibly unsurprisingly, the wider exchanges unfolded over time as indicated by the bluer connections. The deeper exchanges on the other hand are often red, suggesting people are quicker to respond. In 2, this was more because people had different views and became embroiled in heated exchanges. In 4, the rapidity of response was more about helping out a ‘friend’ who was seeking information, then clarification. I need to explore this a little further and try to understand the significance of the horizontal order; it doesn’t quite seem that those tweets over to the left were necessarily the first to come through, and yet further right on the tree does indeed seem to indicate tweets which respond much later. Hmm …

As some of my earlier posts suggest, I’m becoming increasingly intrigued by how temporality has effects and is affected within his space. These Treeverses begin to make some of those temporal aspects visible. The colours are response times, so indicate time span or time delay; I guess we might call it wait time. The connectors also indicate order and sequence; which tweet follows in an ostensibly linear unfolding. A before and after. The script which generates the trees makes some temporal aspects less visible though, like the frequency or intensity of the exchanges which are much easier to detect if you are following a hashtag chat in real time for example. I wonder how (if?) Treeverse might display that? Proximity and clustering perhaps? But hey, I’m grateful for the insights that Treeverse has been able to help with in a way that just wasn’t possible to visualise when the tweets are in a timeline, or tamed in a spreadsheet.