During the past few months, I’ve participated in a number of exchanges on Twitter that have been part of my research. Sometimes this has been no more than a couple of tweets back and forth with one other person. At other times it’s been a more extended discussion involving several people; multiple voices, multiple tweets. What I’ve struggled with over the past year or so, is finding a tool which will display the exchange in a way that simplifies reading the thread(s). If you’ve ever tried reading and making sense from a string of replies to a tweet, you’ll know how tricky this can sometimes be.

When there are a number of responses to a tweet, Twitter lists them in chronological order with the most recent at the top. If someone replies to one of those initial responses though, Twitter begins to thread those discussions together by grouping them under one another. So in each group, tweets are arranged chronologically as before, and all groups are arranged chronologically too. Within a group then, things are fine, but it becomes difficult to appreciate the overall timeline, especially if new channels of conversation open up. Here, the vertical, linear display just gets in the way.

I’ve tried using Twitter’s Moments for this kind of things, but creating one is incredibly labour intensive if there are a few tens of tweets. Here’s an attempt I made to capture a discussion about Twitter in the context of ‘community.’ Picking apart the different threads consumed far too much time and whilst all the tweets are now in one place, it’s still difficult to follow.

I felt this earlier attempt was a little easier to read and made a little more sense visually, but this was created entirely manually. As a one-off, proof-of-concept, it was fine, but the time needed to create it far outweighed the value it provided as a visualisation. I’m trying to address two needs here. First to provide an efficient way for me to be able to visualise and thereby analyse an exchange, but secondly to make that visualisation available to anyone else as I make my findings and analysis open to scrutiny.

I’d tried searching for tools that might automate this process on a number of occasions before, but they tend to to lean more towards the production of social network analysis visualisations. It’s not the interrelationship patterns and metrics I’m seeking, but the dialogue that’s being exchanged and what that does to people. One last punt at a Google search, however, paid dividends (changing search criteria can really make a difference. Duh!) and brought me to Terence Eden’s blog post discussing ‘Treeverse,’ which sounded precisely what I was looking for.

As you can see, Treeverse presents discussions in an organic, tree-like form which more accurately reflects the way that conversations unfold. Using Treeverse really couldn’t be simpler. For non-coders like me, there’s a Chrome browser extension  which needs installing first. Then open a tab containing the tweet exchange of interest and click on the Treeverse icon. That’s it. Your visualisation will appear in another tab. 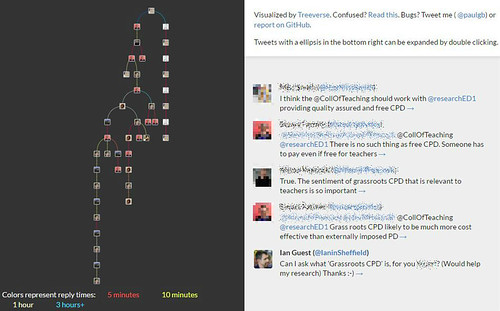 Hovering over a node will reveal the contents of that tweet in the right hand panel, with all the tweets in that particular thread which preceded it. Shift the cursor focus and the thread changes correspondingly. The colour coding of the ties between the nodes provides an indication of the length of time between the two tweets. Whilst it would be great if the vertical axis scale could represent this, given that some tweets and responses are only seconds apart, whilst others may be days or even weeks, that’s probably not a realistic or even helpful wish. What is also useful is you can download your ‘tree’ as an html file for viewing offline, or storing elsewhere.

At last! A tool to help with both analysis and presentation.