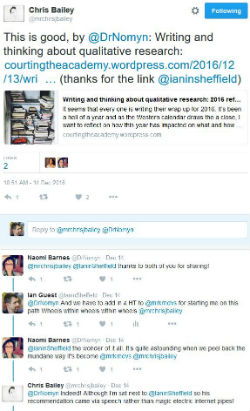 Earlier this week I was engaged in a spatially interesting exchange, in which I was discussing the contents of a blog post with Chris, next to whom I sit here at SHU. The post, authored by Naomi Barnes, had been brought to my attention in a tweet by Aaron, made accessible by the url he had included. Knowing Chris’ interests and current writing, I thought the post might interest him, so I mentioned it … old school … the spoken word. He asked if I would forward the details, which I did by sending an email which contained only the url. Having read the post, he then tweeted his interest and thanked both me and Naomi … which then set in train a flurry of replies, retweets and likes. And one hat-tip.

A couple of thoughts struck me. Firstly, that here was an interchange between four people (at least initially, until others also RT’d or liked one of the tweets), two of whom were sitting next to one another and could converse through conventional, line-of-sound speech, in real time. And two who were in another country, around the other side of the world, separate from each other, and living a different time of day. Despite the strangeness when articulated in those terms, the exchange, which lasted about an hour, felt perfectly natural … ‘mundane’ as Naomi termed it.

When I reflect back at what happened during that exchange, I’m surprised by how much work was done. Information had been shared and for me (and possibly Chris) reading the blog post enabled new knowledge to be constructed. In that undertaking and through the connections which had started to form, we became (more?) aware of each other’s areas of interest. Those connections initiated the process of forming loose relationships in some cases, or re-establishing them in others, and additionally perhaps sowing the seeds of future connections with those who briefly dropped in with an RT or Like. Despite the brevity of the encounter, humour and cordiality shone through – symptoms of the season, reflections of participants’ characters or simply politeness and good manners?

I’d like to pick up one of the threads in Naomi’s post which particularly chimes with one of the concerns I currently have with my own research; that of representation. How do I represent this encounter and retell it, and by extension, the observations emerging in my own research? Well, I guess in one sense I’ve just done it through the preceding text, yet I feel this misses out much of the richness of the exchange … let alone the temporal flow moderated by geospatial and geotemporal separations. Do they matter to a reader? Maybe, maybe not. But at least considering and attempting different forms might lead to fresh insights. At the very least, the capacity for me to include hyperlinks in  my text and the persistence of the exchange (at least the online elements), allow a reader to reader to turn back the clock and unpeel some of what happened for themselves. For our more formal research however, we are of course obliged to consider the ethical issues associated with maintaining ties to the sources of our interpretations and insights. Linking to original data provides no degree of anonymity; did we account for that in our ethics review and have that approved?

Building upon my earlier thoughts on this matter, what follows is one attempt to represent the exchange in a different way; one where the interchanges are highlighted and where flow and eddies are perhaps more prominent?

Here we can trace the sequence of the main exchange; something which could also be achieved by just viewing the initial tweet and subsequent thread. This latter representation however appears somewhat more ordered than the activity as it took place. We’re all in our own spaces, engaged in our own lives and other activity; it’s inherently more messy than the clinical thread that the Twitter platform presents. The tracing brings none of that in, but tips its hat towards the more messy realities.

‘Time’ in the tracing is backgrounded to nothing more than a temporally ordered sequence, whilst the Twitter thread allows access to precise times at which postings were made. But is this a distortion rendered relative to one local time zone? The time experienced by each individual may well be different; what is 11:29 for one, might be 21:29 for another.

What do we see? What is blurred? What is missing?

We only see in the tracing, or indeed in the Twitter thread, the activity of those who interacted. What is always missing from representations like this is the missing masses; those who may have read the tweets, but not felt impelled to contribute. That doesn’t necessarily mean they were unaffected however. They may have read the post and may have been prompted into action or had their thinking shifted, but not felt the need to share that. And what of the knowledge gained from reading the post that sits dormant for a while, waiting for the mental nudge which triggers fresh insights further down the line? Similarly, the peripheral activity of participants over the course of the exchange means that the connection with the original post continues to be maintained and keep appearing in the the timelines of those who follow the participants. The ‘Likes’ and ‘retweets’ linger longer in the profiles of participants and may touch visitors who were not party to the other elements of the exchange which took place in real time. The original exchange may be less ephemeral than it might at first appear.

In what ways though has the tracing helped to shed new light on what Twitter exchanges do? I’m not entirely sure, but I do know that this less structured, less formal, less ordered representation leans more closely towards the actuality. The standard, ordered twitter thread provides a quick, clean, easily accessible digest of what took place; but it misses some of the messiness. The tracing also brings back to the foreground some of the actors Twitter relegates to mere light, grey footnotes in tweets. More than anything, producing the tracing forced me to attend to detail in the way a sociomaterial sensibility ought to; it reminded me of my obligations.