As I prepare for my supervisory meeting this week, I’m reminded of the previous meeting when I offered  this rendering (It’s a much smaller version of the full one and I’m far from happy with the way it displays what I want, but … well, compromise!). It’s an attempt to show some of the activity I’ve been engaged in as a participant observer, but also a little more than that. It serves several functions, providing:

This sits alongside a slightly more conventional set of field notes, although much more brief than the notes which might usually accompany field work. I didn’t see them as needing to capture all the rich detail of the people in view – what they were doing and trying to achieve, what and how they communicated and so on. My notes certainly bear little resemblance to those of traditional ethnography, but then this isn’t a traditional ethnography.

Within the meeting then, it became clear that I needed to consider what work the notes were actually doing, both at the time and their function as I move forward. I need to have a better sense of the epistemology I’m bring to bear in dealing with those fundamental ethnographic principles of description, interpretation and representation. The ethnography we undertake is dictated by the ontological and epistemological assumptions we bring. The nature of reality as we see it, and the way in which we come to know about that reality determine our methodological approach, but also lead to different views about how we inscribe what we find. Humanist and naturalist stances see a single reality out there; an objective truth which can be captured by ‘telling it as it is,’ either through adopting an emic perspective and using ‘thick descriptions’, or by standardising research procedures and instruments (Brewer, 2000). Postmodern ethnography challenges the naive realism of both, and their attempt to access an objective reality ‘as it is.’

Clifford and Marcus (1986) and others problematised the capacity of ethnographers to capture and represent cultures objectively. This led ultimately to what Denzin (1997:p3) referred to as the ‘triple crisis of representation, legitimation and praxis,’ which call into question the claims to be able to represent reality, the traditional criteria by which we interpret and evaluate qualitative research, and by asking whether ‘it is possible to effect change in the world, if society is only and always a text?’ Although I will doubtless need to return to the crises of legitimation and praxis later, I’ll confine myself in this post just to the first listed.

When I produce a graphic or set of notes which purport to show the ethnographic activity in which I’ve been involved, what am I trying to represent? It’s important perhaps to say from the outset that these renderings constitute only a subset of my data; interview recordings and transcripts are not present, although some the blog posts I may later analyse will be. Crucially, the activities presented in the rendering result from choices I made, so the rendering can be nothing other than partial. As I type this it’s becoming clear now that I never documented the criteria by which I would deem some things to be worthy of interest whilst others were left to one side. Perhaps at the outset, I didn’t really know what would take my interest? What I do know is that I was drawn to those tweets, blog posts and comments in which (mostly) educators discussed or identified Twitter as a tool to support or drive professional development or learning. Knowing some of the characteristics of professional learning, as revealed in the literature, I could have gone looking for evidence which illustrated them. Could I see examples of sharing, discussing, collaborating, analysing, mentoring, reflecting etc? I’m fairly sure I could and that would indeed have gone some way to answering a couple of my research questions. However this seems to be ground which has already been trod by other researchers, albeit largely through different methods (Alderton et al, 2011; Holmes et al, 2013). I was keen to explore this from a different perspective.

Some have argued that when conducting research on the Internet, texts may be all you have (Hine, 2000). My attention then, has been drawn to texts which constitute accounts of how people use Twitter, what it has done for them and how and why others might want to pursue similar practices. We should view these accounts as neither true nor false, but produced by a situated author within one cultural context and being read by an audience situated in another cultural context (Hine). As I initially approach them, these accounts are pre-existing and unsolicited, but nonetheless partial. In some cases, interaction with the author is warranted, either to seek clarification or more detail and an informal approach is made, like those which take place in offline ethnographic settings. I included both those accounts I followed up and those which I felt were significant, but didn’t follow up.

Denzin (1997) identifies a number of stages in the sense-making process as the fieldworker collects data from which field notes are inscribed. These flow through intermediate works into the final research text which is presented to an audience. During these phases, analysis, interpretation and presentation take place; they may cross over one another, but the texts which speak for each one may often be discrete from one another. The rendering I offer here, despite its apparent structure, might better be described as a ‘messy text’ in which data, description, analysis, interpretation and reflection are interwoven, to greater and lesser extents. In so doing, the partial nature of this rendering is on view and left open to challenge. Messy texts provide ‘a sense of a whole, without evoking totality;’ they are open and incomplete (Denzin and Lincoln, 2008:p392). Through the direct link back to the data from which it arose, the routes through which interpretation were made become more visible, enabling other interpretations to become possible.

In summary then, I know that I don’t subscribe to a single, ‘out there’ view of reality. Nor do I feel in a position to speak authentically from the Other’s perspective; I can only ever produce a partial representation contingent on the specific context. As I explored some of these issues in the writing of this post, I was constantly aware of how the sociomaterial sensibility I need to bring comes from a different ontological position, one in which reality is both multiple, and performed into existence. Barad (2007) claims that performative approaches

call into question representationalism’s claims that  there are representations, on the one hand, and ontologically  separate entities awaiting representation, on the other, and focus inquiry on the practices or performances of representing, as well as the productive effects of those practices and the conditions for their efficacy.

From this I acknowledge the extent to which I, the people within view, the non-human actors like Twitter and the Mindview application are all part of a sociomaterial assemblage performed into being. The activity the rendering chronicles within the above image is only a frozen instance of the ongoing performance which reconfigures both the activity and the ways in which an audience reads it. As Latour (1999:306) puts it, the rendering becomes a transformation ‘through which an entity becomes materialised into a sign, an archive, a document, a piece of paper, a trace’. However, I would argue it is not singular and meaning is made differently with each new set of eyes which view it, and each index finger that clicks a path through the nodes. 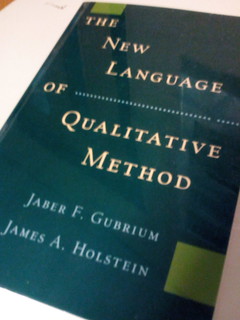 Having just collected this book from the library, I suspect the views I’ve expressed in this post will become adjusted and revised. Perhaps that’s what learning is; a fluid assemblage of mental resources, curated snippets of information, connections to resources, information streams and people. Will think more on’t.

3 thoughts on “Crisis? What crisis?”