The traditional way that most theses are presented is in the form of an 80 000(ish) word report. University regulations usually specify that this should be bound in hard copy format, and ready to be posted onto the shelves in the Library stacks. Recently, in the spirit of openly sharing knowledge, it is becoming common for Universities to also require a digital copy of the thesis for posting to the institutional digital repository. For me then, this will be through the Sheffield Hallam University Research Archive, SHURA. We are also now required, where permissible, to post the data that our research generates. This aligns with my own feelings about research being as open as is ethically permissible, so I have no problem with any of this.

As I have begun drafting my thesis, the necessity for it to conform to the constraint of A4-shaped dead trees is causing me a few headaches. I don’t have a problem with writing text … actually I do, but that’s another story! There are some aspects however, which don’t lend themselves as well to the printed page. Why should they; they’ve come from a hypertextual, multimodal environment. Sure I can take screenshots, or export jpg or png versions of some of the information, but firstly, it doesn’t always work when compressed to fit a page:

And secondly, it will inevitably lose any interactivity that makes so useful and rich. Kyocera has yet, as far as I’m aware, to find the means to print clickable buttons and hyperlinks onto A4 paper.

Publishing your thesis in a digital format is not such a big deal. If you include hyperlinks to online resources within your A4-format MS Word document, you can export it as a PDF within which those links can still be active. Those online resources might simply be the doi’s of your references, any data fragments you’re ethically at liberty to share, or links to larger versions of the images you had to squeeze onto a single page. But when you know how dynamic the Web can be, the PDF option feels like the lower rung on the ladder of possibility.

It’s not unusual these days for people to publish their theses and dissertations as web sites or blogs, though often, I think it would be fair to say, they do that alongside a conventional thesis. In addition to satisfying the University’s rules and regs, it’s also a matter of being considerate towards your examiners. The process of examining a thesis is incredibly demanding and time-consuming, time which examiners may have to find from within their personal lives. Reading a thesis whilst travelling to conference might be a good use of time, but if the thesis is only available as a web site, the reading suddenly becomes much more of a challenge. Just adding marginal annotations you want to follow up with the candidate in the oral examination becomes so much tougher if the thesis is a website … not impossible, but definitely tougher. Why would anyone want to potentially antagonise their examiner by putting them through a trial of strength in order simply to get at their thesis, let alone assess it?! Well …

In some circumstances, producing a digital/electronic thesis makes more sense. Not just an html version, but a rich, multimodal, responsive artefact which adds value for the reader. As I’ve been drafting sections of my thesis, I’ve found certain aspects incredibly frustrating, knowing that if I was reading it, I’d want much more on offer. Simple things like citations and references. Even in PDF versions of articles, let alone online, links are usually provided to the bibliography/reference list. That’s fine, but wouldn’t it be more helpful if hovering over the citation generated a popup, which then contained a link direct to wherever the full paper can be found? Anyone writing about the online world will inevitably often have to refer to web sites. If I mention Tweetdeck for example, in the thesis I would need to provide the url for it, perhaps in a footnote. Often a single page of text will refer to multiple websites and the footnotes can quickly become unwieldy. Wouldn’t it be so much easier if the text hyperlinked straight to the sites allowing the reader to follow up if necessary. From my earlier example, some readers would know exactly what Tweetdeck is, so the footnote for them is redundant; others might not have a clue, but want to find out. In a conventional thesis, that would mean them accurately copying the url, then typing it into a browser address bar correctly. There’s a potential overhead then in their understanding of the message you’re trying to convey.

Most theses contains images of one sort or another, but the job they need to do for the reader varies. A photograph of an ethnographic location performs a very different task to that of graphed results. How much richer for the reader if they could dive into the photo in the way that pegman does on Google Maps Streetview? Or if the graph was interactive and allowed the reader to zoom axes or alter variables? As with the image earlier in this post, some of my visualisations become illegible when scaled down to fit the page. They’re also no longer interactive, allowing the reader to navigate through along paths of their choosing. Some of my visualisations, again like the one above, also contained links back to the source data. This was particularly helpful as I analysed the data, but, where ethics permits, that facility to do that might also be useful for someone reading the thesis. Sometimes you need to break down and discuss different elements within a single image, which can be awkward if using words alone. If the image was interactive in a similar way to ThingLink, then the reader would once again be enabled to proceed across the image as they felt the need, rather than having to follow the text you’ve composed in the order you determined.

There are other ‘add-ons’ that could be enabled within an interactive thesis that aren’t possible within a paper version. Introducing a new term, like ‘ambient intimacy’ would normally require a definition to precede or succeed it. If the reader is already familiar with the term, that definition might not be needed, but you’ve nevertheless presented them with it. If the definition was available as an executable popup, or automatically appeared in the sidebar when the term appeared in the text, then it’s available, but without being obtrusive. During the course of your studies and the drafting of your thesis, you accumulate a wealth of information, much of which ultimately has to be discarded. In the interests of concision, that’s a good thing, but what if you found a video of the academic who first proposed the theory you’re using, discussing it in a seminar. Whilst it couldn’t be included in a conventional thesis, it might be useful for someone less familiar with the concepts you’re using, so the digital version could once more add value.

What I’ve been seeking is a platform which does something like this: 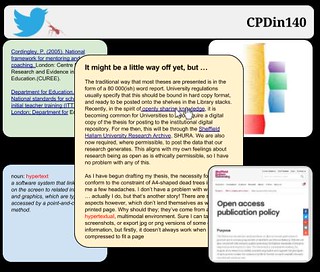 The central panel presents text which can be read in linear form as a conventional thesis. However, it’s also possible to choose different paths through the text: chronologically in the way the research unfolded; thematically, following the findings; theoretically, ethically, by methods etc. These non-linear routes offer the reader choices. The other panels are context sensitive and offer references, images, web-page previews, supplementary information, all of which changes to support the currently visible text. If you hover over a panel, it is given precedence, but drops back when the cursor focus shifts. My web skills only extend as far as the capability to produce a static version of this; I’d have to hardwire all the links to additional information one by one. Very inefficient, time consuming and any changes would need to be manually amended. Since I don’t have the budget to have that designed and produced, I occasionally find myself searching for something that might enable a less skilled author like me to produce a more responsive solution. I think I might have serendipitously found it!

The notion of ‘boundary objects’ recently came up in an article I was reading, so I performed a search to find out more. This took me to ‘Boundary Objects: A field guide’ which helped me understand more about boundary objects, but also caught my attention because of the way it was presented; both interactive and responsive. The platform on which it had been authored is Scalar – “Born-digital, open source, media-rich scholarly publishing that’s as easy as blogging.”

The more I looked, the more I liked. Media support, annotations, in-built visualisations. Whilst seeking examples of projects created with Scalar, I also came across a similar offering, Omeka. Whilst they may not produce the exact look I was after, I think they might be able to replicate some of the functionality. I’ve only had a quick look and need to read and think through the IP issues, ethical issues and the workload that taking this direction might generate. However, reality quickly kicks in and I return to some of the  issues discussed earlier. I’m obliged to ask myself, what’s the purpose of the thesis? It’s not an ebook, it’s a piece of work presented for assessment in partial fulfilment for the award of Doctor of Philosophy. Weighed against that are, for me, two things: reducing the online, multimodal, hyperlinked realm that has provided the setting for my study to a static pile of papers somehow seems to lessen the work; thesis-lite! And there’s also the thought that adding some of the aforementioned enhancements might just make it more useful in a broader scholarly environment. Perhaps making it of value to a larger audience than a thesis might usually enjoy? Undergraduates interested in sociomateriality. Masters students considering digital ethnography. Doctoral researchers wishing to build arguments for and against post-qualitative research.

Whilst there are examples of writing produced through Scalar and Omeka, I’m keen to find specific examples of theses, so if you know of any, do please send me a tweet or add them to the comments below. Or perhaps you have other observations on non-traditional publishing? Maybe you’re an examiner? I’d be delighted to hear your thoughts.