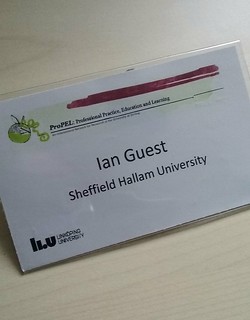 ProPEL 2017 has drawn to a close and I find myself writing this with my head still spinning from the volume of information to which I was exposed. Three keynotes, seventeen papers and a multitude of less formal conversations over coffee and meals. And of course I presented the paper I had submitted: “Professional learning(s) beyond the workplace; Teachers’ learnings with Twitter.” I have to confess to being slightly more unsettled than I normally would be when attending a conference and this doubtless partly due to putting my thoughts out there for the kind of scrutiny which I’ve never experienced before. That of peers and more experienced academics who are in most cases, much more experienced in the field than I. It was a simple matter of the unexpected; how would my work (and I) be received?

The conference opened relatively gently with a couple of hours for registration and the introductions and opening keynote not until 1pm on the Tuesday. I had arrived the day before, so was able to enjoy a run, a leisurely breakfast and then the hike to the conference venue. Unfortunately I’d assumed the conference would be held at the University, so booked accommodation nearby. It transpired however, that instead the conference was to be held in Linköping Konsert & Kongress, in the heart of the city and a couple of miles from where I was staying. Nevertheless, that did give me the chance to see some of the city as I walked back and forth each day.

The three keynotes, one on each day, were given by Monika Nerland, Davide Nicolini and Tara Fenwick, three giants within the broad field of professional learning and knowledge management. Each of these presenters provided an overview, from each of their fields of interest, of where they felt we were and where they saw the fields moving. Though each spoke with clarity, I struggled to follow all the threads of what they were proposing, but  then I have only occupied this ground for 18 months and have some way to go to refine my thinking and understanding. I guess they might feel in a similar position if they were plonked in front of a group of secondary school students and asked to teach some physics. Some of the difficulty I had was with the language which is used to discuss these issues; I don’t have all the vocabulary yet, let alone the grammar. Arda Oosterhof, a fellow PhD student and also presenting a paper, described the difficulties she was having in her research in a similar way. So when someone says ‘simultaneous presence of different logics,’ that takes a while for me to unpick; time you don’t have when trying to follow a presentation.

The papers which were presented followed the usual format of three or four grouped together under a common theme and presented in 20 + 10 minute sessions within a two hour slot. That sometimes meant there were a couple of papers which really spoke to my research, grouped together with two others which were less appropriate. Once it became apparent that it was accepted practice to shift from one venue to another in order to follow your interests, this presented me with a real dilemma. Do I swap across sessions and try to pick up all I wanted to see, or do I stay put and benefit from some of those serendipitous, unexpected revelations. So with ‘Temporalities of Learning’ from Kathrine Taylor, I wasn’t at all sure what to expect; certainly not the research context to be in an allotment! Nevertheless, the references to continuity and instability, recurrence, tempo and attendance/absence, all had something to offer the temporal aspects which seem to be emerging within my own research. From Rachel Shanks and Pamela Timanson’s papers, I was reminded that I need to revisit and rethink my awareness and understanding of learning other than the formal. It became increasingly apparent that I need to get a much better handle on the informal aspects of learning, and/or workplace learning, and how they are related … or not!

One themed group of sessions I picked up on, ‘Migrating knowledge and mobile professionals,’ proved to offer little towards my research, but I couldn’t fail to learn something from each of the three presenters and the way they talked about their topics. They were all Scandinavians, who of course spoke excellent English, but who also structured their stories in completely understandable, thoroughly interesting and carefully considered ways. An object lesson indeed.

Over the three days, although I’d not planned it at all, it transpired that I saw roughly equal numbers of presentations from senior academics at the top pf their fields; well established academics, some of whom have produced work with which I’m familiar; and fellow PhD students at similar or slightly more advanced positions to me. Sometimes I felt myself blown away by the quality of my peers’ work and the way they presented their work, whilst at others I felt that I was beginning to hold my own, even if only from the standpoint of a newbie. Before my presentation which was in the final session of the conference, I really felt that the PhD students who I’d had the chance to listen to, often had the edge over me. There was a clear structure they were following, one that I was only too well aware of. As usual however, I was looking to do something slightly different and with that, inevitably comes risk – would my narrative hold water at this level? Is what I’m saying of sufficient academic depth and does it have sufficient rigour. Well, people turned up to listen (although maybe that was for Terri Lynn who was on after me!), they appeared to be interested in what I had to say and expressed their gratitude, they asked helpful questions, and a few stayed behind and caught me at the end to ask some more. I’m going to call that a result.

What follows must come with a health warning since I’m making these comments based on the presentations I saw, together with the others listed in the conference programme. However, it’s not always easy to tell precisely what the presentation is about based on the title and one-sentence introduction alone. It seemed like there was a weighting towards presentations from the health sector rather than from education or others, but perhaps that’s not surprising given Linköping University’s specialisms. I was also surprised by the rarity of reference to sociomateriality/actor-network theory, given that “The conference welcomes research that applies contemporary practice oriented, sociomaterial theories and innovative research methodologies.” Again, this might simply because of the particular presentations I chose to visit, however, often when sociomaterial issues were broached, it was often no more than a nod towards them, rather than a deep exploration. Perhaps that’s not surprising given that folks only had 20 minutes to make their case, but of course for someone like me, keen to better understand how people adopt sociomaterial approaches, it wasn’t very helpful. Wrong forum to get to grips with that? Or is it that sometimes people decide on a sociomaterial approach, without really ever getting to grips with it? This has certainly been the case in some of the (other) papers I’ve read elsewhere; people say they’re using actor-network theory, mention Latour, and that’s about as far as it goes.

Something I’ve mentioned elsewhere in the blog, but which was also noticeable at ProPEL, was the number of presenters who read verbatim from a script they had pre-prepared. If English isn’t your first language, then I could understand that, but the majority of people who did this (perhaps a quarter of all the presentations I saw), didn’t fall into that category. I’m still not sure why that is. When presenting to academics, I invariably practise my presentation beforehand, repeating it a number of times so that I feel able to talk, hopefully cogently, without notes. If I fluff stuff, well so be it. As an audience member, I’d much rather listen to someone speaking with a more conversational tone than someone speaking a written text which has a completely different flow and rhythm. Maybe it’s confidence, or that presenting a paper is just another form of peer review and there’s the need to ‘get it right’ in order to make a strong case? Maybe it’s the simple matter that folks just don’t have the time to prepare adequately. A shame though.

One area with which I continue to struggle is in approaching people, but at ProPEL I made more of an effort. I stayed to ‘mingle’ on the first evening and managed to chat with a number of people. I mentioned Arda earlier and it was really helpful to speak with someone in a similar position to me who is enthusiastic about what ANT can offer, but who has had to struggle to come to terms with it. At lunch on Wednesday, which was a ‘sit-down’ meal, I happened to find myself sitting next to David Boud, so had a great natter about the trajectory of his career. At the conference dinner, I ended up sitting with Rachel Shanks and Mickey Lowther; our conversation wandered across our academic interests, personal lives and politics – so interesting to get a perspective on what’s happening in South Africa. I really appreciated Terrie Lynn Thompson, an established academic, approaching me the day before our session to chat through areas of overlap, both in presentations and areas of interest. (I was so glad that I preceded her in our session; had I come after her, my modest offering would have struggled to make its mark, given that she covered a phenomenal amount of ground and really struck home some important points regarding the politics surrounding data analystics in an increasingly posthuman environment.)

I have to doff my cap to the front-of-house organisers, Johanna Dahlberg and Diana Holmqvist who exuded efficiency, exuberance, good humour and joy

Thank you all for a wonderful conference and for coming to Linköping, Sweden! Johanna & I enjoyed it immensely! #2017propel pic.twitter.com/uFGJ4di8kF

What a fantastic job they did. And they also deserve credit for choosing the food and refreshments provided by the Konsert. The quality was outstanding, whether at breaks (the tidbits were fantastic) or the lunch and evening meals.

I’m not sure how responsible the team were for the weather, but it too was stunning; sunshine from start to finish, with only a couple of hours one afternoon during which a downpour washed the pavements and paths. With that in mind I was shocked and delighted by the quality of the cycling infrastructure in Linköping. It seemed to stretch to all parts of the town and out into the suburbs, providing a safe and pleasant space to get from A to B, or just to enjoy. I was also struck by the consideration that car drivers gave to cyclists and pedestrians. I wouldn’t want to extrapolate from what I observed to Swedes in general, but over the four days I never once saw the kind of aggression and ill-will that I see several times during my commute back home. One of the local folks said that Stockholm was less well-endowed than Linköping, so maybe it is a local thing. I have to say though that the quietness and peace of the city was so welcome. Again that might have been because I saw the better side whilst commuting to the conference or out running, I never came across the areas where life is more a struggle for folks. Despite the rose-tinted view that the weather helped to generate, I’d love to come back to Sweden to do a more extensive cycling trip … if I could only afford it!

One thought on “Not posthuman, postProPEL…”