Maybe it’s the brevity of being restricted to only 140 characters that causes us to take a tweet for granted. Or perhaps the rate at which we read and produce them has rendered them into little more than message carriers; digital versions of the scribbled notes we might once have passed under the desk in school. Of course they are message carriers, but I’d like to suggest that, thanks to the different components we include, and to Twitter’s algorithms, they actually do much more than that.

I’m going to offer this tweet I produced recently; typical, I’d argue, of the kind of tweet where someone shares something they’ve found. A tweet, I’d argue, forms an actor-network from the elements of which it is composed, together with the resources which move it around and present it to others. I’ve chosen to allow WordPress to embed a ‘live’ version of the tweet so you can get some sense of the interactive aspects, however the version you get from viewing the tweet on Twitter itself, through a web browser will be different. Viewed through an app on a tablet or smartphone, the view will be different again; different devices cause a tweet to be manifest in different ways, so inevitably they play their part in enabling and restricting what we see and what we can do. I’ll restrict myself here then to commenting on the experience you get when viewing the tweet in a web browser.

Perhaps the first element which jumps out is the image, but let’s come to that presently. The text which I typed in when composing the tweet appears to be in two different colours; the default black and a blueish colour. Blue is typically used, from the conventions of the early Web, to indicate hyperlinks, although web designers have the capacity to change that, such as in the theme applied to this blog. The text was not made active by me, but by the algorithms that work behind the scenes, so if a tweet author includes text which begins “http:// ,” that element will be turned into an active, clickable link. Anyone reading the tweet who is aware of the convention knows they have an easy route to the the web resource waiting at the URL. The Twitter algorithm in concert with our choice of text, speeds up the process by which the reader can access the resource in which they’re interested.

A similar result is achieved when we precede some text with the ‘@’ symbol e.g. @IaninSheffield. Twitter interprets @+name as a Twitter user (if one with that name exists in its database). It then adds to the typed text a direct link to that user’s profile, providing a subtle hint that we might like to check out what this person is like. 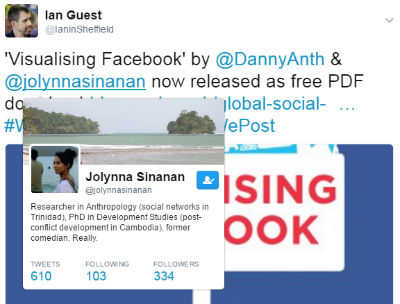 Viewed in a browser, hovering over the @name produces a pop-up giving a preview and more details from the user’s profile – further encouragement to create a connection, and even the means to connect by providing a one-click ‘Follow’ button. Twitter wants us to connect for its own reasons; those teachers on Twitter for their learning also express the desire to connect with each other and expand their network. They’re helped to do that by one small character, the ‘@,’ working in an assemblage with other actors: the author of the tweet, the name s/he chose to use, the tweet itself and the algorithms which underpin it.

Including an @name performs another function; it brings the tweet to the attention of the person who has been named.

The @ character indicates that the username which follows it is addressed in the tweet and the structure functions like a vocative, that is, as a form of address. (Zappavigna, 2011)

Used in this way, we call @name a ‘mention’ and authors will use that for a variety of reasons. Perhaps they’re trying to catch the attention of @name or obliquely inviting them into a discussion. If @name is associated with the resource being shared, then mentioning them credits them in a similar way to that in an academic citation. If the tweet author thinks @name may be unaware of the resource, but interested in it, this mention may bring it to their attention. This is also known as a form of addressivity; tweets opening with an @name direct tweets to a specific person, and also enable replies to the tweets of others. (Honeycutt and Herring (2009) discuss addressivity provided by the @ in much more detail)

Another single character used in the above tweet is the hashtag #WhyWePost. Appending the ‘#’ symbol to some text invokes Twitter to once more enhance the text we incorporated into our tweet. I wrote in previous posts about what the hashtag can do; here I’ll focus on its role in the tweet actor-network. As with the @, the hashtag that the # creates become a ‘live’ invitation to explore further. This time the underlying link which has been added takes you to the Twitter search pages and automatically executes the search function to return recent tweets which contain that hashtag. There’s an associated invitation to learn more; if the hashtag is marshalling a community, then it provides an opportunity to quickly find out what they are saying. If the hashtag curates resources on a theme, then clicking the link immediately filters all tweets to those on that theme.

Introducing a URL into a tweet sends the Twitter algorithm into overdrive. In addition to adding a direct link as mentioned earlier, the apparent length of the URL is reduced so that although it still points to the same destination, it doesn’t swallow up the same number of valuable characters. More significantly however, Twitter fetches some of the content back from the destination and offers it up within the tweet as a preview; an image if there is one and the first couple of sentences of text. The preview might be the first thing that grabs a reader’s attention as they scroll through their Twitterstream. They can then quickly scan the preview and immediately click through to the article/resource/site should they choose.

There are also a number of other elements Twitter appends to a tweet, associated more with the responses to the tweet, rather than generated directly from the content within it. The number of Retweets and Likes are both interactive and a single click will list the profiles of those who responded to the tweet. Once more this information helps encourage new connections between people; those who presumably found the tweet interesting in some way and might be of a like-mind to the author. The icons to enable the reader to Reply to the tweet, Retweet it or Like it, are also provided at the foot of the tweet; further facilitators in spreading the information more widely.

Twitter’s reasons for implementing all these features are clearly driven in the first place by their own self interests. What that means for teachers using Twitter for their professional learning however, is there are features within the platform which support and foster the sharing of resources and ideas, accessing new information, connecting with other (like-minded) people, building a network, and seeking peer support. The elements within a tweet work together to coax – the blue text and attached link is an invitation to probe further – and by adding further inducements, like the preview, press the issue further and cajole. We can test whether these single-character actors really do those jobs by leaving them out and viewing the effect:

Whether we would like to know what the shared resource is like, more about the people cited in the tweet, or the theme the hashtag is curating, we’re going to have to work hard to do that. Whilst these actors may only constitute a single character, the work they do is huge. Take them out and the capacity to learn is reduced.