In my most recent doctoral supervision meeting, I briefly mentioned how I’m recording/tracking the paths I’m taking as I conduct my ethnographic observations. For me, it’s a way to visualise where I’ve been, when I was there, what I saw, what I thought; an alternative to the more traditional, textual field notes (which I’m also keeping by the way). In the meeting, I innocently referred to the process as ‘tracing the field,’ as I have done here in the past. Oh dear! I’d used one of those … ‘little words;’ in fact I’d compounded the problem by also mentioning mapping and representing. Once again I’d committed the sin of using words which may be fine to use in everyday contexts, but which in academic discourse, require much more unpicking. The upshot was that I needed to establish what I meant by these terms. To go away and read, then perhaps write a blog post. Here is the first; I suspect I may need another … or more!

A good few papers and a couple of book chapters later, the magnitude of my inadvertent slip (or lack of academic clarity!) became clear. By using the word ‘representation,’ I’d unwittingly stumbled into the world of semiotics, language and meaning; areas in which I had little more than a passing acquaintance. Stuart Hall (1997) – the cultural theorist – began to open the topic up for me:

Representation is the production of the meaning of the concepts in our minds through language. It is the link between concepts and language which enables us to refer to either the real world of objects, people or events, or indeed to imaginary worlds of fictional objects, people and events. (p17)

There are two strands which work together to help us make meaning; two systems of representation. There are the concepts or mental representations we carry around in our heads, and a shared language through which we can articulate and exchange those concepts. Words, sounds or images which carry meaning are known as signs and it is here that I can begin to consider the graphical records I’ve been producing to illustrate my ethnographic encounters. Before that however, I perhaps need to go back a little further to the origin of the term sign, Saussure, who proposed the sign being constituted of two elements: the signifier (the word or image) and the signified (the concept associated with that word). This video summarises these ideas quite succinctly:

When we move beyond the strictly linguistic elements and begin to consider how signs and culture work together, we are into the field of semiotics where not only the words or images convey meaning, but so to do the objects themselves. On top of the simple, descriptive level of meaning, there is additional layer of interpretation which draws from the cultural context we inhabit. For example the signifier ‘bike’ has an associated mental model in which we may visualise a two-wheeled, self-propelled vehicle (or indeed a particular activity associated with that form of transport) – the signified. But taking that further, ‘bike’ may conjure up an environmentally friendly form of transport, a means to travel quickly through traffic-clogged cities, or inconsiderate road users who don’t pay road tax and jump red lights. Barthes (1973) extended the narrow, linguistic interpretations of language and suggests signs might carry both a meaning and a message. There are two levels of interpretation: the simple, descriptive level – connotation – and a second, broader, cultural or societal level – denotation. In other words, a sign may become a signifier for a broader concept and the new sign produced can become a signifier … well, you get the picture … or sign!

When I now return to my ‘representation’ of my ethnographic meanderings, there are a number of elements I need to consider. Here I’m restricting my comments to the overall effect of the image, rather than breaking down the individual components in too atomistic a way. There is a central point, Twitter, from which pathways indicated by the arrows radiate outwards. The pathways pass through points of interest or nodes, which seem to share some similarities and some differences. The different graphical elements within the image contribute to the whole and constitute the signifiers. The signified appears to be a structure or hierarchy, with Twitter at the centre and a flow outwards, as indicated by the unidirectionality of the arrows. Even at this connotative level, I can see how the visualisation is not at satisfactory as I would have preferred, but then this version lacks the additional hypermodal elements present in the full fat, interactive version. This is not an image solely meant to be viewed, but to be interacted with; to be experienced. Nor indeed does it ‘represent’ the temporality of my ethnographic journeys, apparently portraying them as co-temporal, when in actuality, each pathway was followed to its conclusion in succession.

The more I look back at this visualisation, the more shortcomings I recognise. One that I was only too well aware of at the time is the sense of order that this arrangement suggests. All the pathways seem to proceed through distinct stages. This was not how the actual experience felt, nor what I wished to convey, and was merely done for visual tidiness. 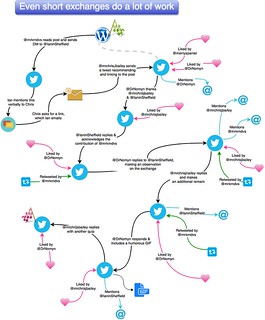 Although I began to address that in a subsequent iteration, the features of the application used to produce this meant I lost the connectivity to the visited nodes. I now had a ‘flatter’ representation which may have reflected more closely the messy flow, but which lost the depth through the links and interactivity.

Discussing ‘representations’ in this way draws from the field of structuralism, in which individual units (components of language in this case) are related to one another and exist within a larger structure. My use of ‘mapping’ and ‘tracing’ in almost the same breath as ‘representation’ may have rung alarm bells for my supervisors because these new terms have particular meanings in the post-structuralist paradigm; so where was I locating my arguments? I’ll attempt to unravel some of that in the next post.